Pranjal Patil: a synonym for BLIND faith in oneself 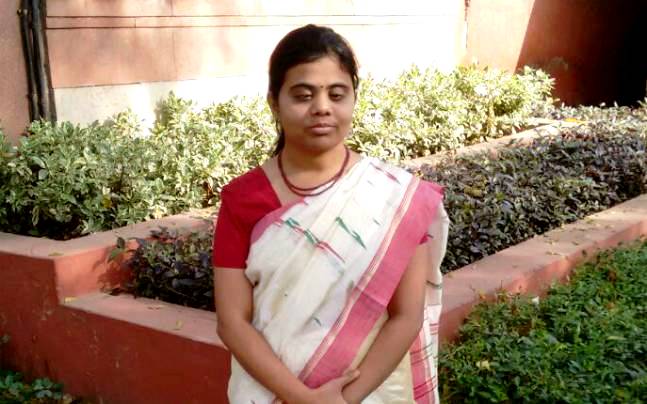 When someone says power cut, we visualize darkness. Similarly when someone says success we visualize, people like Pranjal Patil. It is believed that the blind do not lack imagination, they may not have sight but they do have vision. India's first ever visually impaired IAS officer while taking charge as Sub Collector of Thiruvananthapuram, Kerala firmly established this belief.

"We should never be defeated and never give up." These were the first few words that came out of her mouth while assuming the office. At mere 31 years of age she has set an example for the entire visually impaired group.

Losing one's vision at the age of six would come as a setback in most of the people's life. However, this unfortunate incident did not deter her to pursue her dream job. Despite having lost her eye sight at the age of six, the determined girl did not let her impairment in the way of her education and career. She had studied at the Kamla Mehta Dadar School for the blind for her elementary education then completed her graduation in political science from St. Xavier's college and Master's in International relations from Jawaharlal Nehru University.. Without hesitation and firmly standing with her head held high she pursued Union Public Civil Services exam and scored 773rd rank in 2016. Refusal of job at the Indian Railways Account Service due to her impairment did not discourage or hamper her progress. She fell down at first but bounced back with 124th rank in the second attempt in 2017 and today here we are discussing about the high bar that she has set. She has been a source of inspiration for the millions of visually impaired across the world.

She has also served as an assistant collector in Ernakulam for a year before this position as her training session, then took over from the previous collector, B Gopalakrishnan at a welcome reception arranged for the occasion.

Biju Prabhakar, Special Secretary, Social Justice, who was present, termed her assumption of office as an 'auspicious moment 'for the district of Thiruvananthapuram. Her success stories have made headlines and attracted a lot of appreciation and good wishes.

While addressing the media she said "I am feeling extremely glad and proud after taking this charge. As I start working I will be able to know more about the district and would plan better for it. I expect support and co-operation from my fellow members and people of Thiruvananthapuram,"

The blind community has once again proved that they are in no way different from the sighted people. Visual impairment is no more an obstacle or impediment for them. By no means do they see it as debilitating or the end of their joy. And they don't believe that 'being' blind is their identity. This group of people is as powerful, magnificent and capable as anybody else.

Psychologists say that success in life, education, jobs and career of visually impaired people are directly proportional to the expectations that people around them have, and the degree of positive attitudes they encounter. The more capable and able you believe they are, the more they will shine. We all should believe in them, in their abilities, capabilities and their capacity. And should appreciate them on every battle they conquer.

The young officer has proved that once you have blind faith in yourself and your dreams, there can be no hindrance in your success and the universe will never stand in your way.

Disabilities and Economic Inequalities
Diwali: A festival that brings light into the dark...

A lawyer by profession, Prachi writes for the BPA ocationally and also contributes to other non-profits working in the disability sector.

More posts from author
Thursday, 07 November 2019 Pranjal Patil: a synonym for BLIND faith in oneself
Wednesday, 23 October 2019 Diwali: A festival that brings light into the dark world
Wednesday, 07 August 2019 We can't see but We can Dream - Resources that make it happen.