Diwali: A festival that brings light into the dark world 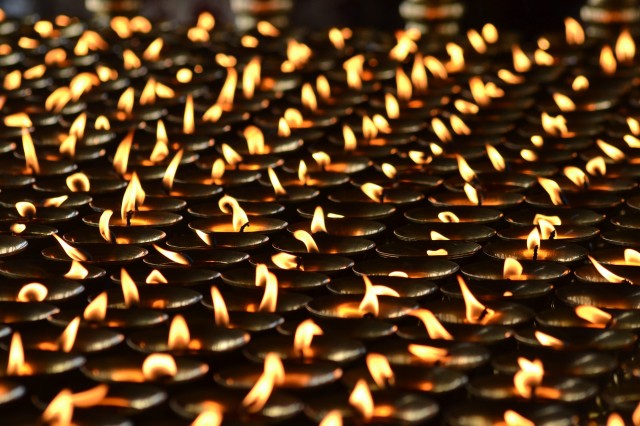 Sky full of fireworks, mouth full of sweets. House full of diyas & heart full of joy. The complete festival of diwali is summed up within these few words. Diwali the symbol of victory of good over evil, is a complete five day package of festivities, happiness, delight and enjoyment. It's that time of the year when friends and families get together and spend time with each other. It is one of the most celebrated festivals of the Indian subcontinent.

Now, one may wonder amidst all the shine of candles, sparkles of crackers and shimmers of lanterns what would the festival of light mean for the visually impaired? To put it mildly, during this time of the year people forget about their impairments and enjoy themselves as if there is no tomorrow. The visually-impaired enjoy Diwali as much as anyone with a pair of eyes does. Even the visually impaired wear new clothes, go to temples for worship, distribute sweets, play games, interact with friends and celebrate with their families. However, these celebrations were a distant dream for them until now because of so many impediments that they have to face.

Being visually dead, these people might commit dangerous mistakes unknowingly. There are instances when they mistakenly believe the bomb to be defused and had to run for their lives when it exploded or mistakenly throwing a firecracker on another person or bursting of cracker under their feet. Obviously not being able to see and judge the surrounding would act as a big obstacle for keeping oneself safe.

However, irrespective of these facts the zeal to enjoy and have fun is never gone. For some diwali is just a melody of sounds as they are completely blind to see even a ray of light, for others it may be a blurry reality of their expectation as they are partially blind and could figure a translucent picture. There are others who are on the verge of losing their sight, for them it is the hardest to pack up all those colors and lights and fix them into their memory for future.

The biggest question that boils up is that what could we do for them? The first and foremost thing that we should keep in mind is that everyone hates restrictions and nobody likes being told what to do or what not to do. Therefore we must appreciate their freedom and realize the fact that such people are constantly under the vigil and protection and hence they crave to go out and be independent. Thus, what we need to do is to restrict ourselves to only assist them in need and help them when there is a clear apprehension that things might go out of hand or they would get seriously hurt if we didn't interfere there and then. Visually impaired people like to spend more time with their friends than their families because the families could sometime become overprotective for no reason.

It must also be noted that the ability to reconstruct a sound or thought in one's mind is the most potent weapon of the visually impaired.They can reconstruct a scenario at the snap of the finger as they do not lack imagination, thus we must be able to appreciate the fact that they are worthy to take care of themselves until and unless there are exceptional situations.

To conclude it would be correct to say that visually impaired may not be able to see the material world but they can well appreciate the values attached to the festival; they have the power to light the world with their presence they don't need to visualize the same.

It's a request to all the readers to curtail down the bursting of crackers that would add up to the already blooming problem of pollution, also it's a humble request to indulge the visually impaired community into your festivities so that they may feel a part of this beautiful world. We sincerely wish that this Diwali each of your homes are filled with good health and all the happiness in the world.

Wishing you all a very happy Diwali !!!

Pranjal Patil: a synonym for BLIND faith in onesel...
Open Mic for the blind

A lawyer by profession, Prachi writes for the BPA ocationally and also contributes to other non-profits working in the disability sector.

More posts from author
Thursday, 07 November 2019 Pranjal Patil: a synonym for BLIND faith in oneself
Wednesday, 23 October 2019 Diwali: A festival that brings light into the dark world
Wednesday, 07 August 2019 We can't see but We can Dream - Resources that make it happen.